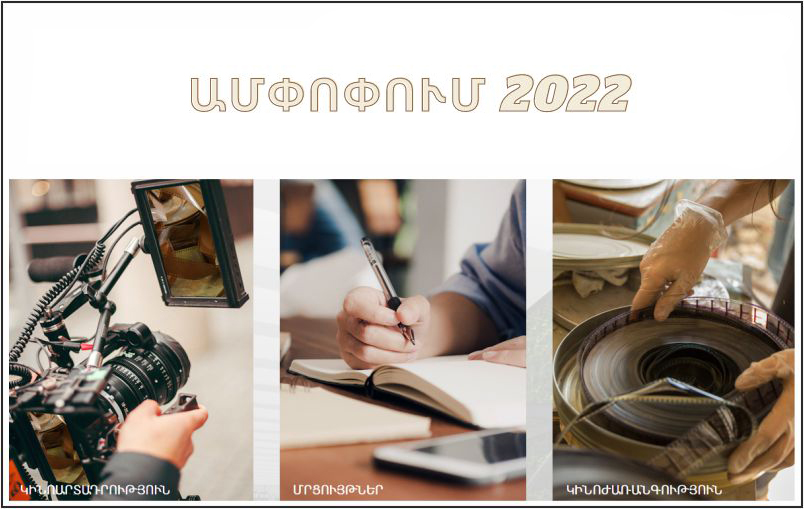 Financial support was allocated to 8 feature film projects in total, among them:

40.61% of the feature film budget was allocated to 5 debut projects (2 full-length features and 3 shorts).

Financial support was allocated to 6 animated film projects, among them:

56.61% of the budget for animated films was allocated to debut animation projects (5 shorts).

In 2022, the involvement of women in film production is as follows: 6 films are directed and 13 are produced by women out of 14 film projects, approved for state funding.

On November 8-11, 2022, the Director of the National Cinema Center of Armenia Shushanik Mirzakhanyan participated in the session of the Eurimages Executive Committee (ExCo) and the two-day conference of the Board of Management in Strasbourg, attended by the representatives and delegations of the 39 Eurimages member states.

During the conference days, Shushanik Mirzakhanyan presented an official proposal for holding the November Eurimages Board of Management meeting in Armenia in line with commemorating events to mark the 100th anniversary of Armenian cinema in 2023. The director of the Cinema Center also had a meeting with Michael Plazanet, the CNC Deputy Director of International Relations, on the issue of signing a bilateral agreement on joint film production between Armenia and France.

In 2022, the National Cinema Center of Armenia participated in the Marché du Film market held in Cannes on May 17-26. The production of Armenian filmmakers was presented both onsite in the Armenian pavilion and virtually on the Marché du Film Online platform. The Armenian online pavilion was linked to the NCCA website and CINANDO (an online database of film projects and professional networking and streaming service for film industry personnel and companies run by the Marché du Film of the Cannes Film Festival).

At Marché du Film, the Cinema Center’s representatives conducted a series of productive meetings, which resulted in a number of preliminary agreements, especially regarding programs to be implemented within the framework of the 100th anniversary of Armenian cinema in 2023, as well as aimed at preservation, restoration and dissemination of Armenian film heritage.

Many of the films that have received state financial support from the National Cinema Center of Armenia in different years and in 2022 have been included in the competition and non-competition programs of various international film festivals. It is also worth mentioning the increased interest towards Armenian short and animated films in the international arena. Majority of films were produced in the framework of joint film production.

Armenian films that received state support in 2022 were worthily represented in the 19th Golden Apricot Yerevan International Film Festival, which kicked off with  Amerikatsi directed by Michael Goorjian; and the animated documentary Aurora’s Sunrise by Inna Sahakyan received the “Silver Apricot” Award in the section of the International Competition of the Festival.

The film Aurora’s Sunrise by Inna Sahakyan was nominated at the Asia Pacific Screen Awards and came winning in the category of “Best Animated Film”.

The film was included in the “Baltic Competition” of the Tallinn Black Nights International Film Festival and won the "Best Baltic Producer for Co-production" award.

It was also included in the “Best of Fests” section of the International Documentary Film Festival Amsterdam (IDFA).  In the co-producing country of the film Lithuania, the film premiere took place at the "Scanorama" Film Festival.

The American premiere of the film took place in the competition program of the Animation Is Film festival at the TCL Chinese Theatre in LA, where the film won the “Audience Award”. In October the film was included in the “Kaleidoskop” program at the Hamburg Filmfest and participated in the “From the Earth to the Moon” program at Doclisboa International Film Festival in Lisbon.

The animated documentary Aurora’s Sunrise produced by the Armenian “Bars Media" production company is a joint production of Armenia, Germany and Lithuania. The film was supported by the National Cinema Center of Armenia and Eurimages– European Cinema Support Fund.

This film, in fact, exceeded all expectations: after the world premiere of Aurora’s Sunrise in competition at the Annecy Festival and following it international screenings, the world press and festival websites keep referring to the film, once again highlighting the Armenian Genocide, perpetrated by the Ottoman Empire 100 years ago with a death toll of 1.5 million Armenians. Witnessing this crime in silence, the world seemingly became an indirect accomplice to it.

Here you can find a complete list of Armenian films included in competitive and non-competitive programs at international film festivals in 2022. Many of the films are award-winning.

On October 7 the Director of the Department of Cinematography and Digital Development of the Ministry of Culture of the Russian Federation Dmitry Davidenko, the Deputy Director of Gosfilmofond Artur Melikyan and the Director of the State Central Cinema Museum Larisa Bazhenova visited the National Cinema Center of Armenia, where they met the NCCA Director Shushanik Mirzakhanyan and a number of Armenian filmmakers.

On August 1, the National Cinema Center of Armenia hosted the Ambassador Extraordinary and Plenipotentiary of France to Armenia, H. E. Madam Anne Louyot and the Cultural Attaché of the Embassy, Mrs. Cyrielle Lourde. During the meeting, the guests were familiarized with the activities of the Cinema Center, its current and future undertakings and issues of digitization, restoration, distribution and preservation of the national film heritage, in particular. The discussion also touched upon upcoming French-Armenian programs initiated for realization within the framework of the centenary of Armenian cinema in 2023.

On July 13, a Memorandum of Understanding was signed between the National Cinema Center of Armenia and the Indian Economic Trade Organization, aimed at the development of the cinema sector and fostering Armenian-Indian cooperation in that field. With this Memorandum the Parties will encourage professional exchanges between professional groups, promote professional training in the field of cinematography and develop joint film production between the two countries.

The ceremonial opening of the 19th Salento International Film Festival in 2022 kicked off with the screening of a state-financed feature Zulali, directed by Hayk Ordyan (Order Film Production). Shushanik Mirzakhanyan, director of the National Cinema Center of Armenia was also invited to the festival and held important meetings in order to reach a number of working agreements prior to the centenary of Armenian cinema in 2023.

The newly printed 35 mm copies of the restored three short films by Sergei Parajanov Hakob Hovnatanyan (Armenia, 1967), Kyiv Frescos (Ukraine, 1966) and Arabesques on the Pirosmani Theme (Georgia, 1985) have been donated to the Museum of Modern Art in New York (MoMA), ensuring the irreplaceable presence of Parajanov's art in their collection.

In 2022, for the first time it was possible to carry out the whole process of professional digitization and restoration of Armenian classical films in Armenia. The following films were digitized and restored - Land of Nairi (1930) and The Daughter (1942) by Hamo Beknazaryan as well as Eduard Martirosyan's short film The Long-awaited Day (1980).

This year, Henrik Malyan's film We and Our Mountains was presented to the British audience in collaboration with the Kino Klassika Foundation on the Klassiki streaming platform and in the framework of the Spaces and Places festival held in London. The film Autumn Sun directed by Bagrat Hovhannisyan (1977) was also presented on the same platforms.

One of the important functions of the NCCA’s Film Heritage rests in collecting documentary materials related to the history of Armenian cinema. This year, the NCCA managed to acquire personal archives of cinematographer Garush Beknazaryan and director Genadi Melkonyan, as well as a large-scale collection of animated cartoons by the master of Armenian animation, Robert Sahakyants.

This year the Cinema Center proceeds with undertaking to digitize huge amounts of documentary materials of the Hayfilm Studio’s administrative archive, preserved by the Cinema Center.  In total, about 500 documents and more than 1,500 photos were registered and digitized, and they will be available to the public in electronic form on the NCCA website next year.

On March 8, on the occasion of International Women's Day the National Cinema Center of Armenia and the "Moscow" Cinema initiated screenings of films directed by women directors.

The following 4 films by women directors were included in the show-case: Handstand, by Ovsanna Shekoyan, Equation with 2 Unknowns, by Lusine Papoyan, The Heiress, by Evelina Barseghyan and Sweeping Yerevan, by Nairi Hakhverdi.

On the occasion of the Day of the Armenian Cinema (April 16) the National Cinema Center initiated a show-case of Armenian films in Kajaran Cinema: The Winged by N. Muradyan, Happy Bluesday by D. Babayan, Upgrade or the Old New by A. Torosyan, Signs of Zodiac: The Year of Dragon by G. Martirosyan, Korean Delicacy by H. Hambardzumyan, Next Station Paradise by H. Makyan and Three Days by D. Nerkararyan.

A series of events dedicated to the 100th anniversary of the great master of Armenian cinema Yuri Yerznkyan were organized and held in Lori, Haghpat and Alaverdi.

The screening of the documentary film “Frunzik Mkrtchyan. India remembers me” took place in the Kajaran Cinema,  and the creative team of the film attended the event.

Yuri Mechitov, a well-known Georgian photographer, documentalist and the author of many photo portraits of Sergey Parajanov was hosted at the National Cinema Center of Armenia. Mechitov created "Sergei Parajanov. Chronicle of the Dialogue" photo book.