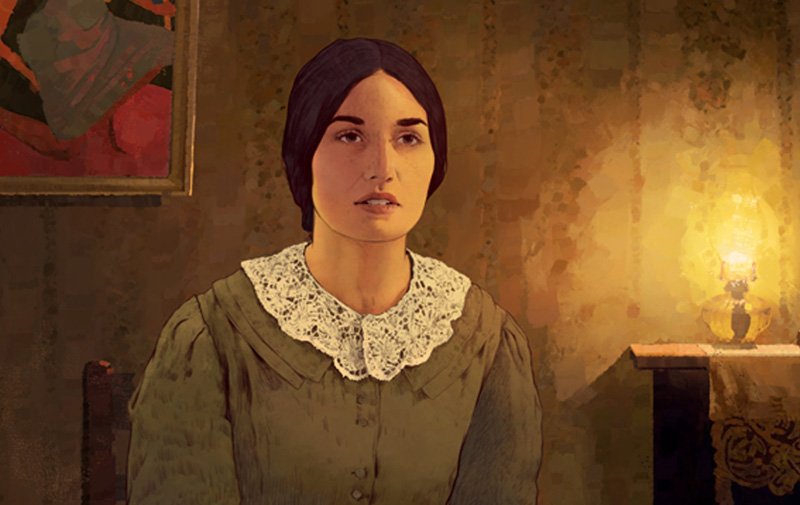 Here we present the Armenian translation of the Academy Awards interview with Inna Sahakyan, the director of AURORA’S SUNRISE full-length animation in the famous news website Business Doc Europe.

The Armenian genocide has been explored in several films in recent years: in Atom Egoyan’s Ararat (2002), Fatih Akin’s The Cut (2014) and Terry George’s The Promise (2016). Now, one of the most traumatic and bitterly contested episodes in early 20th Century history is revisited in Aurora’s Sunrise, the remarkable new documentary by Inna Sahakyan. Sahakyan uses animation to tell the death-defying story of her subject, Aurora (“Arshaluys”) Mardiganian, a young female survivor of the Turkish genocide against the Armenians.

Astonishingly, Aurora eventually made it to the US, had a book written about her experiences and starred in a Hollywood dramatisation of those experiences: Auction Of Souls (1919), in which she herself starred. In the latter part of her life, Aurora, who died in 1994, lived in relative obscurity. She had moved from New York to live in LA following the death of her husband. She had a difficult relationship with her only son, who had married a non-Armenian. “She became lost…in the end, she died alone in an elderly care home,” says Sahakyan. The reasons for the disappearance of Auction Of Souls remain murky, with everybody from the KGB to the Turks being blamed for it slipping out of circulation. However, the footage that remains was rediscovered in Armenian archives in the mid 1990s. In the early 2000s, this footage was digitised and placed in the public domain.

Around 20 minutes of footage of the film survive. So do filmed interviews from late in Aurora’s life. The director uses this archival material in her film alongside the animation. Now, Aurora’s Sunrise has been chosen as Armenia’s contender for the International Oscar. How did the project start? In 2014, Sahakyan had been working on a planned series of animated shorts to tie in with the centenary of the start of the genocide. This was to be based on interviews with survivors collected by the Zoryan Institute, an organisation set up in the early 1980s to promote study of the genocide. Sahakyan and various collaborators were planning to make 10 minute films, “an almanac” as she calls it “of different stories of the genocide.” This was when she first came across Aurora’s testimonies on DVD. “When I listened to it, it was so different from all the others…she never gave up, she always tried to find solutions. She never obeyed,” the director says of the woman whose story she tells in her documentary. It’s wasn’t just Aurora’s story that was fascinating. It was the fact that a big Hollywood movie had been made about her after she moved to the US. As they contemplated the wealth of material available, Sahakyan and her team realised that they couldn’t do justice to Aurora in a short. They needed to make something more substantial.

Aurora’s story is remarkable – and frequently horrifying. As the director points out, her film comes at the subject matter from a new vantage point. “I appreciate all the other films that are in the field,” Sahakyan says, but points out that her version, unlike the others, gives a young woman’s point of view. “For me, it was very important to tell a story of a young girl from her own perspective because this was something, I think, we were lacking in all the previous films. And to tell it [the story] from a documentary point of view…it was very important for me to tell a real story of a real girl who passed through all these horrors but never lost her humanity – and she tried to help others at different stages of her life.” In the interview given late in her life, Aurora makes the point that the Nazi Holocaust against European Jews might not have happened if there had been a proper reckoning following the Armenian genocide. That still has not happened. More than 100 years on, Turkey continues to reject the term “genocide.” Aurora was unflinching in her pursuit of justice for the victims but she wasn’t after vengeance for its own sake. She wanted due legal processes to be followed, not violent retribution. Making Aurora’s Sunrise has been an epic endeavour. “It was more than seven years between the start and the completion of the film,” the director sighs as she remembers the multiple challenges she has faced. “It [making the film] was very heavy both psychologically and in the daily work.” Financing the documentary was the first hurdle. Armenia is “super-limited in its film funds.” In the end, the project was made as a co-production between Armenia, Germany and Lithuania. The backers included everybody from ARTE and Eurimages (the Council of Europe’s Fund) to the Zoryan Institute.

Researching the documentary was also an exhaustive process. Sahakyan was working with a team of scholars, listening to testimonies, consulting multiple media resources and visiting the places Aurora passed through as she fled the genocide. “Then, of course, the animation took about three and a half years,” the director adds. Inevitably, Covid intervened. Animators were working between Armenia and Lithuania but the artists from the two countries couldn’t travel to see each other. “We had to work online through two years of the production period,” Sahakyan notes.
She finally met the members of the Lithuanian team at the film’s premiere earlier this summer at the Annecy Festival. What makes Sahakyan’s achievement all the more startling is that she didn’t have previous experience in animation. “Of course, I was surrounded by really good professionals both from Armenia and Lithuania but all of this online work was really a nightmare, day and night!” To add to the troubles facing the filmmakers, there was an escalation of the conflict in Nagorno-Karabakh in 2020. Several members of the Armenian production team ended up “on the front line” and filming had to be suspended for three months. “We passed through every challenge possible…” However, like Aurora herself, Sahakyan persevered. The film was completed and is now winning plaudits at international festivals such as Yerevan (Silver Apricot), and it has been nominated for an Asia-Pacific screen award. Selected for IDFA Best of Fests, CAT&Docs are handling the world sales and the next step is to secure US distribution. “It is very, very important that the film is seen as much as possible. Of course, it’s a very hard task, but if it is noticed in the Oscar run – if magic happens and it is shortlisted – that will really affect the distribution,” Sahakyan says of how a successful awards campaign might make the film as much of a hit today as Auction of Souls over 100 years ago.