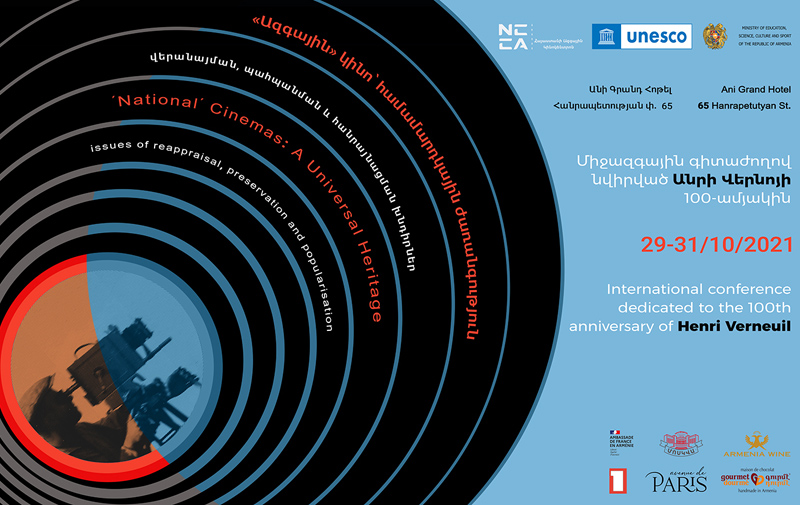 A three-day international Conference “National Cinemas – A Universal Heritage Issues of Reappraisal, Preservation and Popularization” will be held in Yerevan on October 29-31.

The three - day Conference is organised in honour of French - Armenian filmmaker Henri Verneuil's 100th anniversary, which is included in the UNESCO Calendar of Anniversaries of Eminent Personalities and Important Events of 2020. Born in Turkey and relocated to France with his family in 1924, Verneuil's creative path was paved in the context of French commercial cinema, which is brilliantly represented by the over forty films made by this director. Verneuil only turned to Armenian subject matter at the end of his career, releasing his famous autobiographical drama Mayrig in 1991, which also became one of the key works of diasporan - Armenian cinema.

Using Henri Verneuil's legacy and the trajectory of the cinemas from the ex - socialist republics as a point of departure, the conference aims to address these ambivalent phenomena as heritages that complicate received perceptions of 'national' cinemas.

Traditionally seen as isolated phenomena that evolved on the margins of international film, the 'national' - or 'minor' - cinemas of the Soviet Republics and various diasporan communities, have often been excluded from dominant narratives and canons as being of predominantly local interest. These perceptions  occlude the rich inter - cultural processes through which 'minor' cinematic industries evolved and had an impact far beyond their national borders.

Being classified as solely 'local' phenomena, films from countries such as Armenia remain outside of the purview of major archives, museums and festivals, which significantly limits opportunities for their restoration, access and broader circulation.

Working towards opening a cross - disciplinary and critical dialogue on the focal issues pertaining to ideas of national and 'minor' cinemas, the conference will engage over 15 international scholars, critics, archivists and film industry experts, who are working with the legacies of Soviet, socialist, and diasporan cinema.

The Conference will be held in English and Armenian, with synchronized translation. In the frameworks of this event, a special live conversation will be held with Henri Verneuil's son, director Patrick Malakian, along with an exhibition of posters from Henri Verneuil's films and a screening of the director's 1964 war drama 'Weekend at Dunkirk'.

An edited publication with papers presented at the conference will be released by National Cinema Center of Armenia following the event.

Diaspora and the issues of defining an Armenian 'national' cinema.

15։45 - Daniel Bird (France/Poland, independent film historian, curator) A Sideshow on a Trip to the Abyss: why Stephen Sayadian's films should be on UNESCO's World Heritage list (English)

18։30 - 22։00 - Opening of the exhibition dedicated to the posters for Henri Verneuil's films and screening of the director's 1964 film Weekend at Dunkirk, at Moscow Cinema.

13։30 - Sona Karapoghosyan (Armenia, film historian, critic) The Internationalisation of Armenian Cinema and Its Festival Politics during the Second Half of the 20th Century (Armenian)

16։00 - Garegin Zakoyan (Armenia, film historian) Heritage and Inheritors. What Film Heritage We Have Inherited and How We Oversee It (Armenian)