AURORA’S SUNRISE - memories of a survivor, lessons taught by history 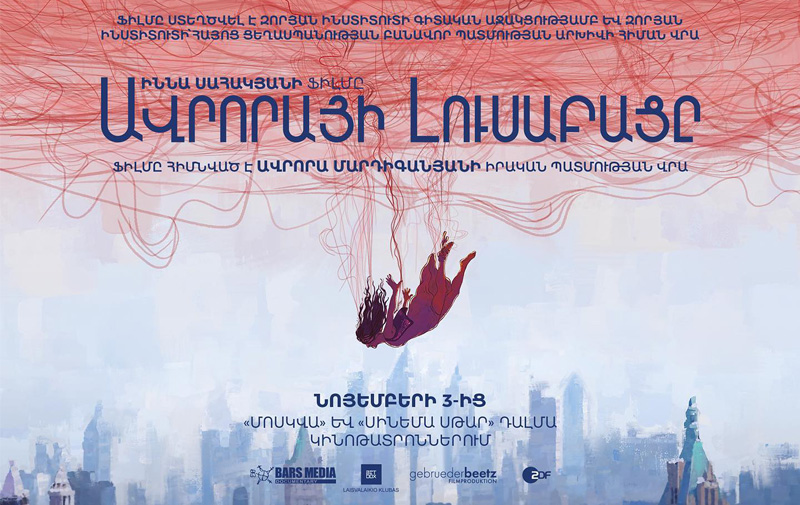 The animated documentary Aurora’s Sunrise will be released in Yerevan cinemas from November 3-17. The Armenian premiere of the film took place back in July, in the frames of the Golden Apricot Yerevan International Film Festival, where the film was included in the international competition section and won the Silver Apricot award. The animated documentary Aurora’s Sunrise is a joint production of Armenia, Germany and Lithuania. The film received financial support from the National Cinema Center of Armenia and Eurimages, the largest European cinema support fund (Armenia as the majority co-producer).

The animated documentary Aurora’s Sunrise is the official submission of Armenia to the 95th Academy Awards "Oscar". The film has also been nominated in the "Best Animated Film" category at the Asia Pacific Screen Awards, competing with 5 other films. The results of the Award Ceremony will be announced on November 9-11 in the city of Brisbane, Australia.  APSA is rated as one of the most prestigious awards in the Asia-Pacific region equivalent to the "Oscar", where the best films are selected for award.

The film is included in the Baltic Competition of the Tallinn Black Nights Film Festival, which kicks off on November 18, as well as in the Best of Fests section of the International Documentary Film Festival Amsterdam (IDFA). The Lithuanian premiere of the film (co-producing country) will take place at the Scanorama film festival on November 19.

The film made its American premiere on October 23 at Grauman's Chinese Theatre in Hollywood within the competition program of the Animation Is Film festival, where the film came winning with the Audience Award. At the beginning of October, the film was included in the Kaleidoskop program of the FilmFest Hamburg and participated in the “From the Earth to the Moon” program of the Doclisboa International Film Festival in Lisbon.

The world premiere of the film Aurora’s Sunrise took place at the competition program of the prestigious Annecy International Animation Film Festival. Following the premiere and international screenings of the film, foreign press and festival websites continue to make publications about the film, referring to the Genocide perpetrated by the Ottoman Empire 100 years ago, with a death toll of 1.5 million Armenians, who were exterminated on their own land.

We present some of the publications: The film Aurora’s Sunrise on the theme of the Armenian Genocide was included in the list of “5 must-see movies" of the Animation Is Film festival in 2022. "Aurora's Sunrise is a hybrid documentary that depicts the life of Aurora Mardiganyan through animation”, LA Times writes.

Review: Aurora’s Sunrise is an Impassioned Admonition Not to Forget and Deny the Horrors of History։ In 1919, Hollywood produced a silent film, “Auction of Souls,” which later on became a box office hit. The film was based on the true story of Aurora Mardiganian (Arshaluys Mardigian), a teenage Armenian genocide survivor.

Soon after the box office success, however, all copies strangely disappeared. It wasn’t until several months after Aurora’s death in 1994 that fragments of “Auction of Souls” were rediscovered. This film, thus, is an attempt at using those fragments to retell Aurora’s forgotten story.

The film is based on historical events: the Armenian Genocide, the dramatic life story of an Armenian woman who survived the Genocide.

Arshaluys (Aurora) Mardiganyan is one of the few Armenian Genocide survivors who managed to leave valuable testimonies of the perpetrated crimes, which became the basis of the 96-minute feature animated documentary film Aurora’s Sunrise. The film was made possible with the academic contribution of the Zoryan Institute (Canada) and is based on its Oral History Archive. It is a joint production of Armenia, Germany and Lithuania (co-producing companies- Bars Media, Gebrueder Beetz Filmproduktion and Artbox Laisvalaikio Klubas). Director and screenwriter - Inna Sahakyan, Producers - Vardan Hovhannisyan, Christian Beetz, Justė Michailinaitė․