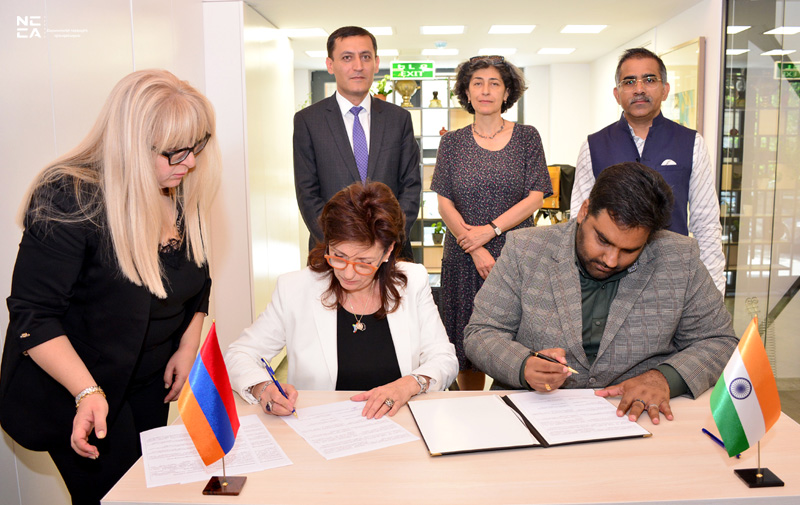 On July 13, a Memorandum of Understanding was signed between the National Cinema Center of Armenia and the Indian Economic Trade Organization aimed at the development of the cinema sector and fostering the Armenian-Indian cooperation in that field.

On the Armenian side the Memorandum was signed by Mrs. Shushanik Mirzakhanyan, the director of the National Cinema Center of Armenia, and on the Indian side by Mr. Yateesh Venkatesh, the Vice President of the Indian Economic Trade Organization.

The ceremony was attended by the Deputy Minister of the Ministry of Education, Science, Culture and Sport of the Republic of Armenia Mr. Artur Martirosyan, the Ambassador Extraordinary and Plenipotentiary of the Republic of India in Armenia H. E. Mr. Kishan Dan Dewal, the Head of the Department for Modern Art of RA ESCS Ms. Svetlana Sahakyan, Indian producers and other field professionals.

With this Memorandum the Parties will encourage professional exchanges between professional groups, promote professional training in the field of cinematography and develop joint film production between the two countries.

In compliance with the Memorandum’s articles the Parties will support within their own capacity the duly presentation and valuing of other Party’s cinematographic production each in their relevant countries. By mutual agreement, the Parties will organize film-related forums, online or offline, in which film industry professionals will participate. The Parties will consider the possibility of establishing the INDIA-EURASIA FILM ACADEMY of non-formal education in Armenia.

In his congratulatory speech the Deputy Minister Artur Martirosyan expressed hope that signing of the Memorandum will set a good ground for long-lasting and extensive cooperation between Armenia and India, consolidating the development of programs in the educational and film production sectors of the film industry.

The Ambassador Extraordinary and Plenipotentiary of the Republic of India in Armena H.E. Mr. Kishan Dan Dewal noted the importance of signing the Memorandum, highliting Armenian-Indian friendship and centuries-old strong ties. The Indian diplomat is convinced that this initiative will soon yield results, growing into large-scale projects.