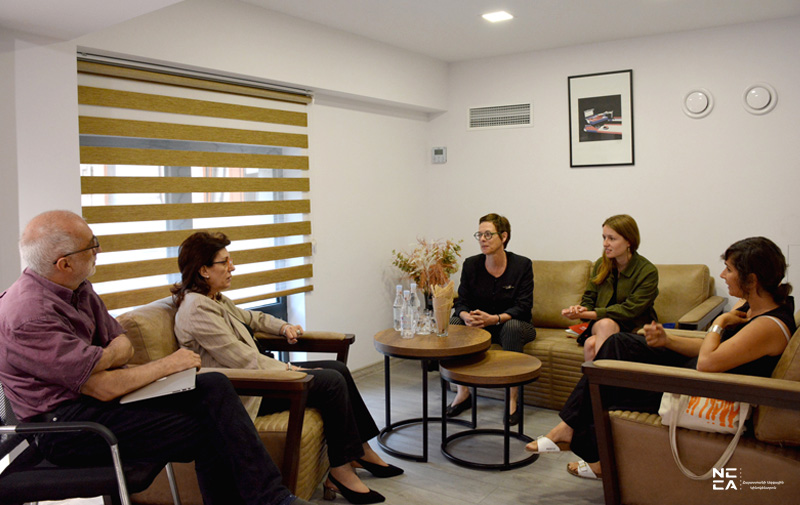 On August 1, the National Cinema Center of Armenia hosted the Ambassador Extraordinary and Plenipotentiary of France to Armenia, H. E. Madam Anne Louyot and the Cultural Attaché of the Embassy, Mrs. Cyrielle Lourde.

During the meeting, the honored guests were familiarized with the activities of the Cinema Center, its current and future undertakings and issues of digitization, restoration, distribution and preservation of the national film heritage, in particular. The discussion also touched upon upcoming French-Armenian programs initiated for realization within the framework of the centenary of Armenian cinema in 2023.

Prospects of joint film production, as well as the possibilities of exchange of experience of professional groups and implementation of professional trainings were also discussed with the Ambassador.

A screening of three short films by Sergei Parajanov (Hakob Hovnatanyan,1967; Kyiv Frescoes, 1966; Arabesques on the Theme of Pirosmani, 1986), scanned and restored from the original camera negatives in 4K, was organized in the foyer of the Cinema Center. After the screening, the honored guests were familiarized with Temple of Cinema project- an installation of outtakes from Sergey Parajanov’s Sayat Nova (The Color of Pomegranates) film. The installation was successfully presented at the Rotterdam International Film Festival in 2019 and in the same year during the Golden Apricot IFF in Ayrarat Cinema, Yerevan.